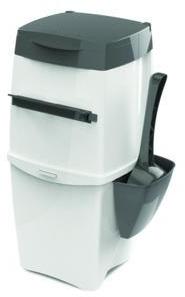 “The LitterLocker is really easy to use and is great for people who are working as it save’s loads of time messing about with little nappy sack type bags etc. All you have to do is open the lid, drop, and pop! Also the LitterLocker really does contain the smell. I have 3 cats and empty the LitterLocker every 1 – 2 weeks depending on the litter used and there is absolutely no smell coming from it even if I lift the lid”.

“I have 5 cats and despite my initial reservation about it not being suitable for a multi cat household it actually works really well. The LitterLocker makes it quick and easy to look after the litter trays. All you have to do it scoop the soiled litter into the LitterLocker and any odours are locked away. Also I don’t have to waste a carrier bag every time I need to empty the litter trays, which alway ends up making the rubbish bin smell”.

“The LitterLocker is a boon for busy people. We can fill it up and there are no nasty aromas. I empty once a week, only because I prefer to, but I’m sure it would last 2 weeks if it had to. I am thinking that I may be able to ask a friend now to look after our cat “Willow” when we go away for short trips as it is not a big deal to empty her litter box straight into the LitterLocker. This would save us money and Willow who is almost 18 years old a lot of stress. We have in the past flushed litter down the toilet only to end up blocking the drains. So previous to this we trekked outside at least twice a day to empty it into the bin. This is an ingenious product which I can see helping a lot of people who own cats”.